Broadway Barks and Main Line Animal Rescue are thrilled to announce their partnership in Braille Tails, a unique project that provides free print-Braille books about companion animals to schools and libraries throughout the United States, starting with inaugural editions of Bernadette Peters’ highly successful children’s books Broadway Barks and Stella Is a Star. 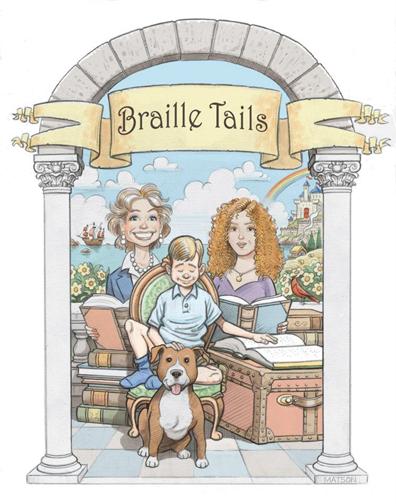 The National Federation of the Blind estimates that the Braille illiteracy rate among visually-impaired children in the United States is at 90%. That is a staggering statistic. A shortage of Braille instructors, lack of funding for Braille education in public schools, and the high cost of Braille reading materials are among the causes for this alarmingly high illiteracy rate. Also discouraging is that only 5% of all books published ever become available in Braille, and only a small fraction of those are children’s books.

According to the Humane Society of the United States, six to eight million cats and dogs enter animal shelters in the United States each year. Unfortunately, four million of those cats and dogs—about one every eight seconds—are euthanized. Millions of healthy companion animals are killed every year simply because they are homeless.

So, how are these two important issues linked? The most disturbing aspect linking braille illiteracy and animal homelessness, is that they are preventable. We can prevent both of these issues by joining together, educating ourselves and others, and focusing our efforts to combat the root causes of these issues. Additionally, the children and animals at the heart of these issues often thrive in each other’s presence and are natural, healing companions. American author and lecturer Helen Keller understood this human-animal bond and how meaningful and healing a relationship with a companion animal can be. Keller had many canine companions throughout her life and was an out-spoken proponent of education and therapy involving animals. Broadway Barks and Main Line Animal Rescue also understand the incredibly powerful nature of the human-animal bond, which is what led to this incredible partnership.

In the Spring of 2012, Broadway Barks attended a “pet and play” session at Royer-Greaves School for the Blind in Paoli, Pennsylvania. (To read more about the “pet and play” sessions click here) The session included homeless puppies and dogs from the nearby Main Line Animal Rescue. All of the students were blind and many had additional disabilities such as autism or cerebral palsy. Watching the students and animals interact was wonderful, and as the behavior of the students indicated, the interactions had a positive effect on each of their lives. The children offered the animals attention and affection, and the animals provided the children with sensory stimulation and non-judgmental companionship. The “pet and play” sessions expanded and soon the students of Royer-Greaves School for the Blind were taking field trips to Main Line Animal Rescue to interact with not only the dogs, but also with cats and rabbits. It quickly became clear to all involved that the interactions with the animals were good for both the students and the animals, but how could these fun interactions be transformed into a way to help blind children with their education? The answer was “Braille Tails.”

For generations, authors of children’s books have used animals as the central characters in their stories to inspire and motivate their young readers. Braille Tails hopes to inspire blind and visually-impaired children with these same stories while promoting the humane treatment of animals, encouraging adoption of shelter pets, and celebrating the special friendships between children and animals.

Books selected for the Braille Tails project are transcribed by accredited Braille transcribers and thoroughly proof-read. The book text is then entered into a computer and printed/embossed onto adhesive-backed clear plastic sheets. These sheets are then applied over the book pages so that the book text and illustrations remain visible. This allows the books to be read and enjoyed by both sighted and visually-impaired readers.

The first two books of the Braille Tails project were Broadway Barks and Stella is a Star, by Broadway Barks co-founder Bernadette Peters. Copies of these two wonderful books were donated to 65 schools and public libraries throughout the United States. The next two books in the Braille Tails project are Jack & Jill: The Miracle Dog with a Happy Tail to Tell and 500 Cats by award-winning Today show correspondent and author Jill Rappaport. Future titles will include; Maggie’s Second Chance by Nancy Furstinger, It’s Raining Cats and Cats by Jeanne Prevost, and A Home for Dakota by Jan Zita Grove.

Books selected for the Braille Tails project encourage teamwork and trust, and respect for all living things. The characters overcome obstacles and learn to love themselves for who they really are. Perhaps most important, these stories teach the reader they are not alone and that life has infinite possibilities. And whether you are a child with a disability or a homeless shelter pet, we all need help from time to time to realize our full potential.